More Ways Than One to Be a Mom Have you noticed that news outlets reporting stories of those tragically killed or missing almost always include parental status, if the victim had minor children? It’s not that being a mother or father automatically confers greater worth in our culture. But the impact on society is significant when children lose a parent or guardian. Those in authority need to make immediate decisions concerning the physical and emotional well-being of minors.

Scripture tells us our spiritual health is equally important. Those who are more mature in the faith are explicitly instructed to guide younger believers. For women, a spiritual mother can be anyone who is part of the labor process when new life in Christ begins or anyone who acts as a model or mentor for someone younger in the Lord.

There are many kinds of mothers. The Bible draws no biological boundaries when it comes to sharing their stories. They include traditional moms like Sarah, mother of Isaac; Hannah, Samuel’s mother; and Eve, mother of us all. Volumes have been written about Mary of Nazareth, the most famous mother in history.

Spiritual moms described in Scripture include Naomi, mother-in-law to Ruth, whose close relationship prompted the younger woman to declare perpetual fealty. The most well-known mentoring relationship of all is the one described in the gospel of Luke, when Mary visited her pregnant cousin Elizabeth. Nothing is known of Mary’s relationship with her parents, but God provided an older female relative who welcomed her warmly and affirmed the angel’s astounding message.

Familial ties aside, the Bible also honors women who exemplified strong leadership in a patriarchal culture. Deborah served the children of Israel through her extraordinary gifting as prophet, ruler, warrior, arbiter, and judge. Miriam, along with her younger brothers, Moses and Aaron, was one of the three great leaders of Israel during the period of the Exodus.

What’s striking about these stories is the clarity Scripture brings to the subject of true spiritual motherhood. There is no record of Deborah bearing biological children, yet she is called “a mother in Israel.” Like Deborah, Miriam fulfilled a prophetic role while also leading the Israelites in worship.

What’s most encouraging is that these women were gifted and influential, but certainly not perfect. God himself confronted and disciplined Miriam when she spoke against Moses, yet the record reveals she was restored after a time apart and honored until her death. If we think we need to wait until we’re fully mature to fulfill the role of a spiritual mom, we have Miriam’s example. She was ninety-plus years old, and God was still working on her!

Being a spiritual mom goes beyond evangelism, helping to birth new life in Christ, just as being a traditional mom goes beyond raising children from birth, fostering, or adoption. We have a responsibility to those who are younger in the faith to nurture and care for them. The ultimate goal? Raising them to resemble our Father. 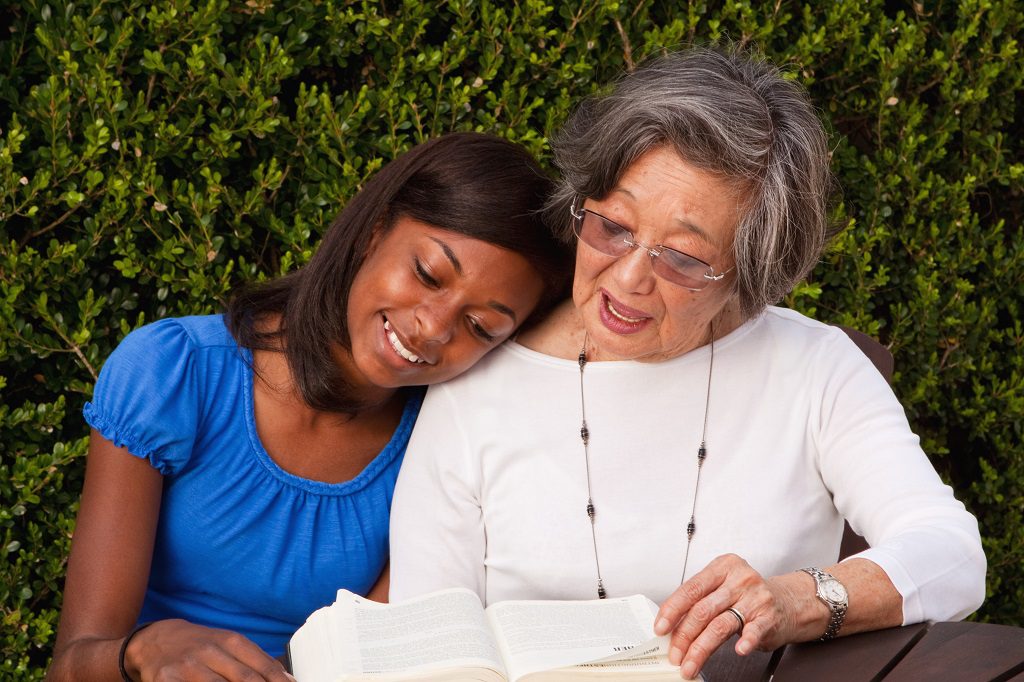 Beth Moore has said, “Once we fall in love with Christ, we are so taken with his beauty, we want children who look just like him. That’s spiritual motherhood in a nutshell; raising sons and daughters that look just like their Father.” It’s not an easy task. It’s impossible, actually, without empowerment from the Holy Spirit. An enormous responsibility? Yes, but thankfully, it’s our response to his ability.

And here’s the promise, friends. Even as we tend to our spiritual young, whether in our home, workplace, or classroom, our Great Shepherd is tending us. We have the unfailing love of our Father to see us through. There are many kinds of moms, and more ways than one to become one. Look around—someone might be praying for a “mom” just like you.

1. Is there a woman in your life who has served as a spiritual mom to you? What did you value most about her presence in your life? List a few things you’ve learned from her that you’d like to pass along to others.

2. Read the story of Deborah in Judges 4–5. In what ways can the example of her gifting as prophet, ruler, warrior, and arbiter apply to spiritual motherhood in our present-day?

3. Actress Della Reese said in an interview, “My mother was a personal friend of God’s. They had ongoing conversations.” One of the most powerful ways you can serve your spiritual progeny is by praying for them. How can Jesus’ prayer in John 17 serve as a model to pray as he did for protection, unity, joy, and holiness for those you care for?

LifeLine: Becoming a spiritual mom is not a matter of biology but theology. When we love God, we’ll love his children too.

Read more of Maggie's writing in her book, This Life We Share: 52 Reflections on Journeying Well with God and Others.

This article was originally posted on The Arc.