Looking for a cozy read this Valentine’s Day? These Christian romance novels pair perfectly with long winter afternoons and steaming cups of tea. Get ready to be swept off your feet and enamored with hours of reading pleasure from both historical and contemporary Christian romance fiction!

Not sure which novel to start with? Take this fun quiz to find out (and earn 10 Reader Rewards points)! Find these and other Christian romance novels in the Reader Rewards store to redeem for points. 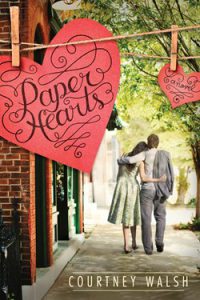 Could the loss of her dream lead to her happily ever after?
Abigail Pressman never would have guessed that love notes penned on paper hearts by an anonymous couple could challenge her doubts about romance. A business owner in a quaint tourist town, she dreams of expanding. But lately, she’s more focused on resisting the matchmaking efforts of the Valentine Volunteers, who gather in her store to continue Loves Park’s tradition of stamping mail with the city’s romantic postmark.

When Abigail is unwillingly drafted into the Volunteers, she encounters the hearts, a distraction that couldn’t come at a worse time. A hard-to-read doctor has become Abigail’s new landlord, and he’s threatening to end her lease.

As she fights a growing attraction to this man intent on crushing her dreams, Abigail is inspired to string the hearts in her store, sparking a citywide infatuation with the artsy trend. But when a new batch of hearts arrives, it appears something tragic has happened to the couple. Will uncovering their story confirm Abigail’s doubts, or could it rescue her dreams . . . and her heart? 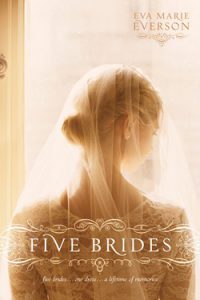 One dress, five women, a lifetime of memories.
Five single, fiercely independent women live together in a Chicago apartment in the early 1950s but rarely see one another. One Saturday afternoon, as they are serendipitously together downtown, they spy a wedding dress in a storefront window at the famous Carson, Pirie, Scott & Co. After trying it on—much to the dismay of the salesclerk and without a single boyfriend or date between the five of them—they decide to pool their money to purchase it. Can one dress forever connect five women who live together only a short time before taking their own journeys to love and whatever comes happily ever after? 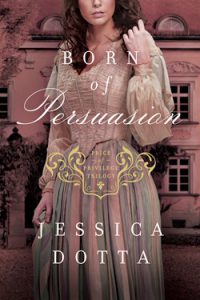 Born of Persuasion by Jessica Dotta

The year is 1838, and seventeen-year-old Julia Elliston’s position has never been more fragile. Orphaned and unmarried in a time when women are legal property of their fathers, husbands, and guardians, she finds herself at the mercy of an anonymous guardian who plans to establish her as a servant in far-off Scotland.

With two months to devise a better plan, Julia’s first choice to marry her childhood sweetheart is denied. But when a titled dowager offers to introduce Julia into society, a realm of possibilities opens. However, treachery and deception are as much a part of Victorian society as titles and decorum, and Julia quickly discovers her present is deeply entangled with her mother’s mysterious past. Before she knows what’s happening, Julia finds herself a pawn in a deadly game between two of the country’s most powerful men. With no laws to protect her, she must unravel the secrets on her own. But sometimes truth is elusive and knowledge is deadly. 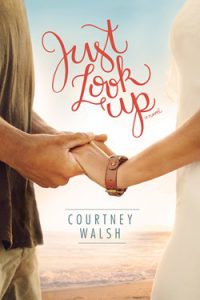 Just Look Up by Courtney Walsh

After tirelessly climbing the ranks of her Chicago-based interior design firm, Lane Kelley is about to land her dream promotion when devastating news about her brother draws her back home—a quaint tourist town full of memories she’d just as soon forget. With her cell phone and laptop always within reach, Lane aims to check on her brother while staying focused on work—something her eclectic family doesn’t understand.

Ryan Brooks never expected to settle down in Harbor Pointe, Michigan, but after his final tour of duty, it was the only place that felt like home. Now knee-deep in a renovation project that could boost tourism for the struggling town, he is thrilled to see Lane, the girl he secretly once loved, even if the circumstances of her homecoming aren’t ideal.

Their reunion gets off to a rocky start, however, when Ryan can’t find a trace of the girl he once knew in the woman she is today. As he slowly chips away at the walls Lane has built, secrets from his past collide with a terrible truth even he is reluctant to believe. Facing a crossroads that could define his future with Lane and jeopardize his relationship with the surrogate family he’s found in the Kelleys, Ryan hopes Lane can see that maybe what really matters has been right in front of her all along—if only she’d just look up.

Redeem this books for points in the Reader Rewards store. 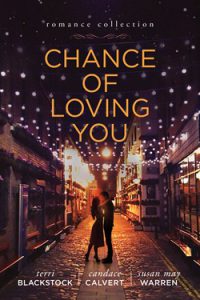 Chance of Loving You by Terri Blackstock, Susan May Warren, and Candance Calvert

For Love of Money by Terri Blackstock
Trying to launch her own design firm while waitressing on the side, Julie Sheffield was drawn to the kind man she waited on at the restaurant last night . . . until he stiffed her on the tip by leaving her half of a sweepstakes ticket.

The Recipe by Candace Calvert
Hospital dietary assistant Aimee Curran is determined to win the Vegan Valentine Bake-Off to prove she’s finally found her calling. But while caring for one of her patients—the elderly grandmother of a handsome CSI photographer—Aimee begins to question where she belongs.

Hook, Line & Sinker by Susan May Warren
Grad student Abigail Cushman has agreed to enter Deep Haven’s annual fishing contest. She’s a quick learner, even if she doesn’t know the difference between a bass and a trout. But nothing could prepare her for competing against the handsome charmer she’s tried to forget since grief tore them apart.

One chance for each woman to change her life . . . but will love be the real prize?

Each story is followed by a delicious recipe.